As a part of our socratic seminar during block day this week, you can also bring a question about the video we watched in class - Metallica's "One." Many of you were probably familiar with the song because of Guitar Hero or Rock Band the video games. How many of you had seen it before? How many of you knew the video was about World War One?

To watch the video again, click here: One Video on Metallica's Site. Just scroll down to the bottom and it is the first one at the bottom. 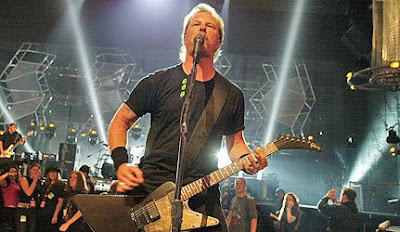 Now that the war is through with me
I'm waking up, I cannot see
That there is not much left of me
Nothing is real but pain now

Hold my breath as I wish for death
Oh please, God, wake me

Hold my breath as I wish for death
Oh please, God, wake me

Now the world is gone, I'm just one
Oh God, help me
Hold my breath as I wish for death
Oh please, God, help me

Questions you might want to consider for Socratic Seminar for Wednesday:

How did the video make you feel? What do you think it would be like to be that person who survives trench warfare, but just barely? Is it humane to keep the person alive? How did the video bring out the horrors of war?

More info on the song and video:
The song's theme is based on Dalton Trumbo's 1939 novel Johnny Got His Gun. It is based on the story of a soldier whose body was severely damaged after he was hit by a German artillery shell during World War I. His arms, legs, eyes, mouth, nose and ears were gone and he could not see, speak, smell, or hear; but his mind functions perfectly, leaving him a prisoner in his own body.

Metallica is the 7th biggest selling act in American history.

"One" was the first Metallica song for which a music video was created. The music video, directed by Bill Pope and Michael Salomon, debuted on MTV on January 20, 1989. The video is almost entirely in black and white, and features the band performing the song in a warehouse. It features dialogue and several scenes from the 1971 film adaptation of Johnny Got His Gun. Timothy Bottoms can be seen starring as Joe Bonham, the main character in the novel.

Metallica bought the rights to Johnny Got His Gun so they would be able to use it exclusively for the video for "One". Three versions of the "One" music video were made - the first (the longest, album version) contained scenes of both the band and scenes from the movie. The second was simply a shortened version of the first and the third lacked scenes from the movie.

Like many other music videos from the metal band, "One" puts great emphasis on the performances of the band members as musicians, with many shots of Hetfield, Newsted and Hammett's hands picking and fretting. The video features the band members in a typical early Metallica fashion - playing (as if in rehearsal) in some sort of warehouse, in tight formation around Ulrich's drum kit, and dressed in casual street clothes and with long untamed hair.

In the music video, it can be clearly seen that both Hetfield and Hammett are playing ESP guitars. It is also clear that Newsted is playing bass with his fingers at the start of the song, but later switches to a pick.

The music video was ranked 38 on Rock on the Net: MTV: 100 Greatest Music Videos and number 1 on Fuse's No. 1 Countdown: Rock and Roll Hall of Fame Special Edition.

The inspiration:
Lead singer/song writer James Hetfield has been inspired by Dalton Trumbo's book/movie "Johnny Got His Gun". The idea for the song's opening riff originates from a Venom song called "Buried Alive".

The subject matter:
Hetfield’s reason for writing the lyrics was the thought of being cut off from the outside world just like the main character of Dalton Trumbo's book/movie "Johnny Got His Gun."