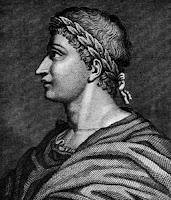 Quote of the Day: "Time the devourer of everything." - Ovid, Roman Poet (pictured to the right source)

Learning Targets:
* Why was Rome successful?
* What was the impact of geography on the development of the Roman Republic and Empire?
* How was the government of Rome organized?