Quote of the Day:  "Finally I can live like a human being" - Nero, after moving into the Golden House, built upon burned out areas after the great fire of Rome. 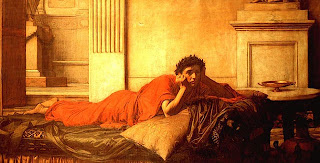 *  Explain what SPQR and the "Roman Republic" meant to the people of Rome.

*  Why did the Roman Empire collapse?

*  Could the US fall someday, just as the Roman Empire once did?

1.  Warmup Question - Finish your reflections on the video projects that were presented in your class.  Which 3 were your favorites and why?  Mr. Duez will collect these.

2.  Rome Question - What did SPQR and the idea of the Roman Republic mean to the Roman people?

3.  Notes - Caesar, Nero and Pax Romana.  Then the Rise of Christianity and the Fall of Rome

4.  If time we will do a philosophical chairs disccussion about the question - "Will the US fall someday, just as the Roman Empire once did?"

Read the chapter.  Study the notes and vocabulary.  Be prepared for 30 scantron questions and 4 essays.