Saints Aren’t the First to Call on Fleur Power 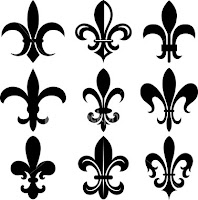 
But it is much more than just the logo of a modern-day football team. Throughout history, the fleur-de-lis has represented many things, including royalty and religion. The symbol, an artistic representation of a flower (a lily or an iris), has been found on ancient Greek and Roman coins.

Like an inkblot in a psychological test, the fleur-de-lis of the Saints can have several interpretations. Some may see it as a most aggressive flower or as the tip of a spear or an arrowhead.

New Orleans players like it but vary in their awareness of its meaning. Linebacker Jonathan Vilma said he did not know of its floral origin. Linebacker Marvin Mitchell called it a “fleur-de-leaf.”

Defensive end Bobby McCray said: “It’s not like all the other logos in the N.F.L., like a simple animal or something like that. This is pretty distinguished.”

Drew Brees, the quarterback of the Saints, called the fleur-de-lis “a big part of what New Orleans is all about” because it is a symbol of the culture dating to French rule.