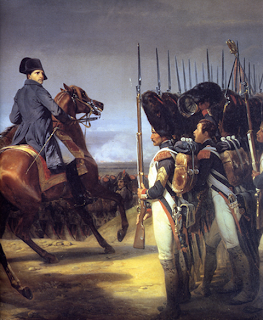 Quote of the Day:  “History is a myth that men agree to believe.”  -Napoleon

Targets:
* Napoleon formed a new government, the consulate, in which he held absolute power. In 1802 he was crowned emperor and signed a peace treaty with Russia, Great Britain, and Austria.
* At home, he made peace with the Catholic Church and created a functioning bureaucracy. His Napoleonic Code preserved many of the rights gained in the revolution.
* By 1807, Napoleon had created a French empire. In parts of the empire, Napoleon sought to spread the revolution. However, his invasions had contributed to the spread of nationalism as well.
Agenda:
1.  Review the questions from the French Revolution Video.  Be sure that everyone has the correct answers.
2.  Introduce Napoleon & notes
3.  Video from Chapter 18 - Napoleon.  10 min look at his life.
Review for the test next time.
What should you do to prepare for the test?
1.  Read Ch. 17 Section 1 & 2.
2.  Read all of Chapter 18 (including Napoleon)
3.  Review your notes from class and the blog.
4.  Review the questions and answers from the French Revolution video from class.
at 3/08/2010 01:16:00 PM