Quote of the Day:  “A great leader's courage to fulfill his vision comes from passion, not position.” - John Maxwell 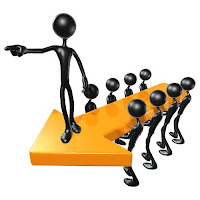