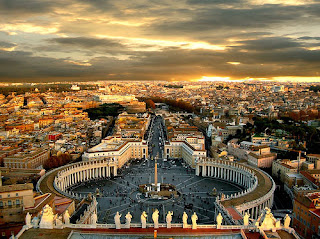 
·          Geography greatly influenced the development of . The narrow Italian peninsula was an important crossroads, and farmland was plentiful. itself was strategically situated inland on hills along the .
·          In the late sixth century the Romans overthrew the Etruscan kings based north of and established a republic. Wealthy patrician landowners in the Roman Senate dominated the early republic. Male nonpatrician Romans, called plebeians, voted and served in the army, but they could not marry patricians or be elected.
·          never became a democracy, but it did develop universal standards of justice that have influenced many societies.

Agenda:
1.  Discuss Greece Test and pass out make up tests (for students who were absent on Friday).
2.  Discuss World Leader Essay, due tomorrow.  Reminder.
3.  Notes/Introduction of Chapter 5 Rome.