Quote of the Day:  "Although extraordinary valor was displayed by the entire corps of Spartans and Thespians, yet bravest of all was declared the Spartan Dienekes. It is said that on the eve of battle, he was told by a native of Trachis that the Persian archers were so numerous that, when they fired their volleys, the mass of arrows blocked out the sun. Dienekes, however, quite undaunted by this prospect, remarked with a laugh, 'Good. Then we'll have our battle in the shade.' "  — Herodotus, The History of the Persian War 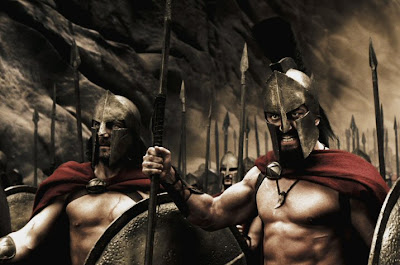 
Agenda:
1.  It is Homecoming Week.  We'll take some pictures with those in school spirit - today is "Miss Match Day."  Mr. Duez will be decked out.
2.  Notes - Spartan Lifestyle.  We'll focus on their government, role of women, role of men.
3.  We'll watch footage from the video: "The Last Stand of the 300"
4.  If time remains we'll study vocab for the quiz.