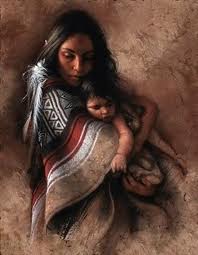 Quote of the Day:  "We do not inherit the earth from our ancestors, we borrow it from our children."  ~Native American Proverb

* The diverse geography of the Americas resulted in the emergence of many varied and highly
advanced civilizations. Some of these early civilizations were wiped out by diseases introduced
to the Americas by European expeditions.
• In North America, these early inhabitants included the Inuit people near the Arctic Circle, the
Anasazi people of the Southwest, the Hopewell peoples of the Ohio River valley, and the
Iroquois of the Northeast. The Iroquois built villages of longhouses and had a highly organized
alliance called the Iroquois League.
• The Iroquois relied on the land and specifically - corn, beans, and squash, called the"three sisters.” • Mesoamerica refers to areas of Mexico and Central America that were civilized before the arrival
of the Spaniards.The Mayan, Aztec, and Incan civilizations developed and administered
complex societies.
• The arrival of the Spaniards in the sixteenth century brought diseases against which the Aztec had no immunity. Devastated by these diseases, the Aztecs were defeated by the Spaniards, who then destroyed much of Aztec civilization.