Quote of the Day:  "You have to perform at a consistently higher level than others. That's the mark of a true professional." - Joe Paterno 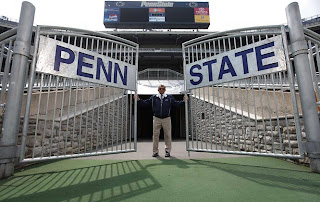 Learning Targets:
* Compare and contrast Eastern (Kush, Axum) and Western (Ghana, Mali, Songhai) Early African trading empires.
* Understand the power of religion in determining culture of early Africa.What impact does Islam have on the development of early Africa?
* Valuable trading commodities, such as iron and gold, were the basis for their wealth and power. In exchange, they received metal goods, textiles, horses, and salt from the Muslim merchants of North Africa.
* Villages in southern Africa consolidated more gradually to form states. One of the wealthiest and most powerful was Zimbabwe, which flourished from 1300 to around 1450.  For most Africans, family and ancestral relationships were paramount. Slavery was practiced, and women were usually subordinate to men. However, lineage was based on the mother, and mothers had a key role in educating children.

Agenda:
1.  Warm up - Write your thesis statement that answers the prompt for the Castle Project paper.  We will briefly discuss the project.  It is due on Friday.
Castle Poster or Model
Coat of Arms
Essay
2.  Introduce next unit - Chapters 7, 11, 13.  We'll start with Africa today and work on The Americas on Wed/Thu.  Next week we'll finish The Americas and begin Chapter 13 European Explorers. The test is next Friday.
NOTES - CHAPTER 7 AFRICA
at 11/30/2010 07:11:00 AM