Quote of the Day:  "Gold is a treasure, and he who possesses it does all he wishes to in this world, and succeeds in helping souls into paradise." - Christopher Columbus 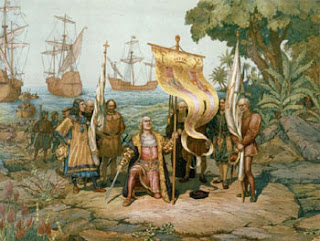 ·         The explorations of the fifteenth century led to expanded European power and a sharp increase in trade. Colonization, a dramatic growth in the slave trade, and the spread of Christianity were among the consequences of European expansion.
·         The European conquest was primarily a biological one. Explorers and colonists brought a wide range of deadly communicable diseases directly from crowded European cities.
·         Slavery, which had been practiced in Africa since ancient times, saw a dramatic rise in the sixteenth century. Many of the slaves were sent to Brazil and the Caribbean to work on sugarcane plantations.
·         Understand the motivating factors behind why European explorers would risk so much to journey to new lands.
·         Determine and explain the difference between the two separate routes and philosophies of the Portuguese and Spanish explorers.
*   Explain the impact of the Treaty of Tordesillas on the development of the “New World.”