Quote of the Day:  "Make each day your masterpiece." - John Wooden, great baseketball coach of the UCLA Bruins. 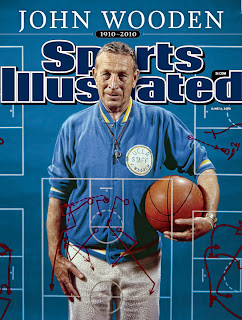 •  From 1560 to 1650, Europe was filled with economic and social crises. Witch-hunts were common. Religious disputes in Germany left over from the Peace of Augsburg led to the Thirty Years' War. The war evolved into a much larger European struggle.
•  Charles I of England was executed by Oliver Cromwell, a military genius who led a revolt against the crown. The English Revolution was the latest battle in a struggle pitting Parliament against the monarchy.
•  In 1688, King James II fled to France and the Dutch king, William of Orange, took power with almost no bloodshed. In exchange for the crown, William and his wife, Mary, accepted a Bill of Rights, laying the groundwork for a constitutional monarchy.

Agenda:
1.   "Good News" for Friday - T.G.I.F.!
2.   Watch a Video Project Example from previous year.  Your Proposal for the project is due on Monday, Feb. 28th.  Write up your project choice, what you plan to do (type of software you'll use), why you want to do this project and be sure to make it good.  Best proposal will get their selection in each class.
3.   Collect Homework for Chapter 14 (quiz on Tuesday)
4.   Cold Call for Chapter 14 Section 1.  Review.
5.   Notes Chapter 14 - "Thirty Years' War" and "Glorious Revolution."