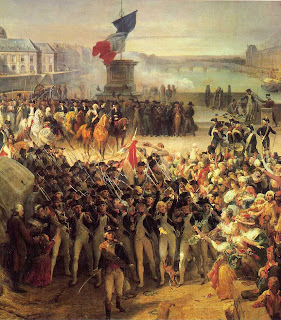 •  Poverty and deep social divisions were the backdrop of the French Revolution. On the eve of the revolution, financial crisis gripped the government of Louis XVI. Rather than accept higher taxes, the commoners in France's legislative body, the Estates-General, broke off to form a National Assembly.
•  Anticipating an attack by the king's forces, commoners then stormed the Bastille prison, marking the start of the Revolution. The new Assembly took control of the Catholic Church and adopted the Declaration of the Rights of Man and the Citizen. The document was inspired in part by the American Declaration of Independence and Constitution.
•  France was soon at war with Austria, where some feared the revolution might spread. Louis XVI was taken captive by the Paris Commune. The commune called for a National Convention and forced the revolution into a more violent phase.
•  During the first years of the revolution, a republic was established, Louis XVI was executed, and thousands of people were killed on suspicion of opposing the revolution.
•  The National Convention responded by forming a Committee of Public Safety. The committee led a 12-month Reign of Terror, executing close to 40,000 suspected enemies and expunging signs of Catholic influence. The committee also raised the largest army in European history and repelled the invading armies.
•  With the crisis past, the National Convention ended the Reign of Terror and executed its zealous leader, Maximilien Robespierre. Power shifted into the hands of more moderate middle-class leaders who produced a constitution in 1795.

Agenda:
1. Watch the first half of "The French Revolution."  Students will answer questions as they watch the video.
Mr. Duez will post links to the Youtube Versions (in case any students are missing from class)

Mr. Duez will stop the video from time to time to teach a bit about the Revolution.

Test will be Wed/Thu after the break.  We'll finish the French Revolution in class on Friday.  Then when we return, Mr. Duez will teach about Napoleon and then we'll review Chapters 17 and 18 on Tuesday.  Test Wed/Thu.