Quote of the Day: "We have achieved peace for our time." - British Prime Minister Chamberlain after meeting with Hitler. 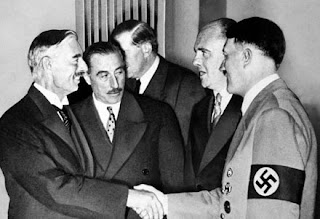 
CH. 26:  The German and Japanese occupations of neighboring countries led to a brutal war that took millions of lives. Both countries were defeated, but not before the Nazis had killed millions of people in pursuit of Aryan domination of Europe.
• Aggressive moves by Germany and Japan set the stage for World War II. Adolf Hitler began a massive military buildup and instituted a draft in violation of the Treaty of Versailles.
• The German annexation of Austria alarmed France but did not shake Great Britain's policy of appeasement. Appeasement of Germany peaked at a conference in Munich where Hitler claimed he sought only one final territory, the Czech Sudetenland. This soon proved false.
• When Hitler signed a nonaggression pact with Stalin and invaded Poland, Britain and France declared war on Germany.
• Japanese expansion into Manchuria and northern China brought condemnation from the League of Nations. While still at war with China, Japan launched a surprise attack on U.S. and European colonies in Southeast Asia.
• German forces swept through northern Europe early in the war and set up the Vichy government in France.
• German air attacks on Great Britain resulted in fierce British retaliation.

Agenda:
1. Good News - Discuss the wonderful job by our Choir in their spring Showtime! production this past weekend.
2. Notes & Discussion - World War II begins.  Hitler breaks the Versailles Treaty & Munich Agreement and invades European countries in 1939.
I am poem is due tomorrow in class.
at 5/16/2011 08:28:00 AM