Quote of the Day:  "The Americans who went to Europe to die are a unique breed.... (They) crossed the seas to a foreign land to fight for a cause which they did not pretend was peculiarly their own, which they knew was the cause of humanity and mankind. These Americans gave the greatest of all gifts, the gift of life and the gift of spirit." - President Woodrow Wilson during World War I 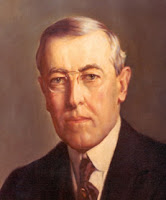 Learning Targets:
Targets Chapter 23 - World War I
• Russia was unprepared for World War I and suffered massive casualties early in the war. Bread shortages and anger at the mounting casualties brought street protests led by working-class women and a workers' general strike. Nicholas stepped down as czar, and a provisional government was formed.
• Soviets—councils representing workers and soldiers—sprang up throughout the country. In the soviets, Bolsheviks, a socialist group committed to violent revolution, played a crucial role under the leadership of V.I. Lenin. In October 1917, the Bolsheviks overthrew the provisional government.
• The czar and his family were held captive and then executed by members of a local soviet. Civil war ensued between the Bolshevik Communist regime and anti-Communists. Despite aid from the Allied forces, the anti-Communists were defeated by a well-disciplined Communist Red Army.
• Allied forces finally defeated Germany at the Second Battle of the Marne but would not make peace with the German emperor. In the face of upheaval, William II fled Germany. Social Democrats then formed a democratic republic, which signed an armistice with the Allies and crushed a Communist attempt to seize power.

Agenda:
1. Bin Laden update - 5 min.
2. Notes from Chapter 23 World War I - Eastern Front, Russian Revolution, US Enters the War, & Flander's Field
We will also take a look at 10 minutes of the GREAT documentary from BBC - "World War One From Above" (Youtube Link)The portion we'll look at has to do with the men who flew airplanes over the western front.
3. Quiz over the notes.  Are you really ready for Friday yet?

TEST IS FRIDAY!  STUDY THE NOTES.  READ THE CHAPTER - 23.  THINK ABOUT WHAT  YOU WOULD WRITE FOR YOUR DBQ