Quote of the Day:  “The great masses of the people will more easily fall victims to a big lie than to a small one.” - Adolf Hitler 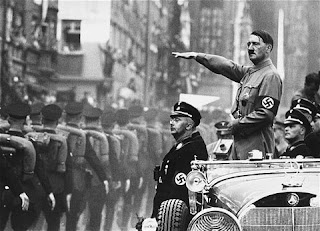 • Adolf Hitler, a failed student and artist, built up a small racist, anti-Semitic political party in Germany after World War I. Hitler's Beer Hall Putsch failed. In prison, he wrote Mein Kampf—an account of his movement and his views. As democracy broke down, right-wing elites looked to Hitler for leadership.
• In 1933 Hitler became chancellor. Amid constant chaos and conflict, Hitler used terror and repression to gain totalitarian control. Meanwhile, a massive rearmament program put Germans back to work. Mass demonstrations and spectacles rallied Germans around Hitler's policies.
• Hitler's Nuremberg Laws established official persecution of Jews. A more violent anti-Semitic phase began in 1938 with a destructive rampage against Jews and the deportation of thousands to concentration camps. Increasingly drastic steps barred Jews from attending school, earning a living, or engaging in Nazi society.
• After World War I, radio and film became sources of entertainment as well as propaganda tools. Hitler and the Nazis made wide use of both.


Agenda:
1.  Video "Crisis of Credit."  We'll compare the 2008 Great Recession to the 1930s Great Depression.
2.  Pass out the DBQs for World War II.  Students should choose one of the two and it is due next Friday.  (Test will be the following day on Monday)
3.  Notes & Discussion: "Rise of Dictators" Hitler
We'll see a clip from The Triumph of the Will (click to watch) - the incredible Nazi propaganda film created by Hitler's film maker, Leni Reifenstahl.