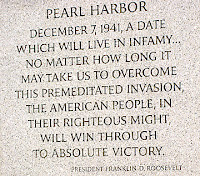 CH. 26:  The German and Japanese occupations of neighboring countries led to a brutal war that took millions of lives. Both countries were defeated, but not before the Nazis had killed millions of people in pursuit of Aryan domination of Europe.
• In the east, harsh weather and a resolute Soviet Union defeated an invading German army.
• The Japanese conquered the Pacific but miscalculated when they attacked the U.S. naval base at Pearl Harbor.
• By the end of 1943, the tide had turned against Germany, Italy, and Japan. After the D-Day invasion of Normandy, the Allies liberated Paris and defeated Germany.

Agenda:
1.  We will take a few moments to do some I Am Poetry readings.  And a couple of minutes to discuss DBQ that is due on Friday.
I will be using the standard school grading policy for the DBQ.  100-75-60-15-0  So get it in on time.
2.  Finish Notes on the War in Europe, Part II.  We'll discuss Stalingrad and see a small portion from the movie "Enemy at the Gates."  Then D-Day and a small portion from "Saving Private Ryan."  We'll discuss the end of the war in Europe.
3.  We will introduce and discuss the war in the Pacific.  On Friday we'll see the making of the HBO Series "The Pacific."  And we will finish Chapters 24 and 26.  Watch videos about The Pacific here.

The DBQ is due on Friday.
The TEST is Monday.

I will be here after school on Thursday for tutoring, if there are any questions.