Quote of the Day:


Aidan on Easter, "This is awesome.Way better than Halloween. You get candy and don't have 2 walk to houses!" The mind of a 5 yr old. 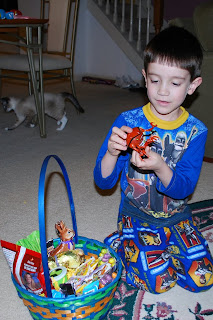 Learning Targets:
*  Competition over trade and colonies led to the formation of two rival European alliances—the Triple Entente of Great Britain, , and ; and the Triple Alliance, consisting of , , and
*  Strikes and violent actions by Socialist labor movements also threatened European governments. Many states responded with increasing militarism.
*  The assassination of the heir to the throne of by a Bosnian Serb militant set off a chain of diplomatic and military decisions that led all of the great powers of into World War I.
Agenda:
1.  Intro to WWI - Chapter 23 (pass out CH. 23 Targets)
2.  Notes on Chapter 23 - "Path to War"
Tomorrow the project product is due.  We will start presenting them after 10-15 minutes of notes on WWI.
at 4/04/2010 07:47:00 PM