Quote of the Day:  "There will never Queen sit in my seat with more zeal to my country, care to my subjects and that will sooner with willingness venture her life for your good and safety than myself."  - Queen Elizabeth I during her Golden Speech 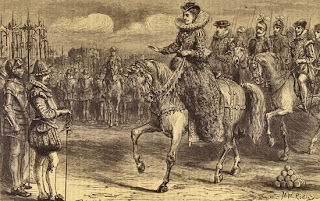 Learning Targets:
Chapter 14 Targets
Section 1
Europe in Crisis: The Wars of Religion
• The English monarch, Elizabeth, sought to placate both Protestants and Catholics at home while balancing the power of France and Spain. Hoping to restore Catholicism to power, Philip tried to invade England and met with disastrous results.
Also - understand what is expected from the Video portion of the Video project.  Mr. Duez will show some examples from previous years and also share the rubric with the class.

Agenda:
1.  We will begin with a video and discussion about Queen Elizabeth's speech at Tillbury which assured her troops while they waited the invasion of the Spanish army.
2.  The class will then conduct a Socratic Seminar in small groups.  Students should have annotated (follow directions on the handout) of Queen Elizabeth's Golden Speech:
http://www.mrduez.com/2011/02/elizabeth-is-golden-speech.html
3.  We will come back together as a big group and discuss the speech.  We'll see a quick video clip that explains the historical implications of Queen Elizabeth's Golden Speech.
4.  Mr. Duez will distribute the Video Project - Video Rubric.  We'll also see an example or two from previous years and discuss the expectations for the project.
at 2/15/2011 02:09:00 PM