Quote of the Day: "I do not want a husband who honours me as a queen, if he does not love me as a woman." - Elizabeth I 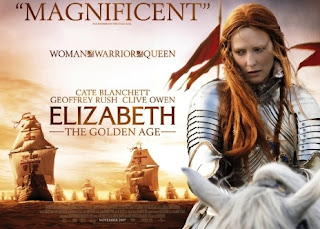 • The English monarch, Elizabeth, sought to placate both Protestants and Catholics at home while balancing the power of France and Spain. Hoping to restore Catholicism to power, Philip tried to invade England and met with disastrous results.
• From 1560 to 1650, Europe was filled with economic and social crises. Witch-hunts were common. Religious disputes in Germany left over from the Peace of Augsburg led to the Thirty Years' War. The war evolved into a much larger European struggle.

Agenda:
1.  Distribute Video Project Rubrics & show an example of a great video project from the past.
2.  Notes - Absolutism - England's Queen Elizabeth & the Spanish Armada
3.  Tomorrow we will discuss in Socratic Groups: "Elizabeth's Golden Speech."  Have read and annotated it for class Wed/Thu.