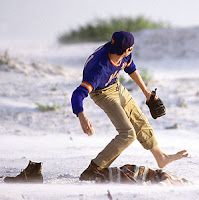 Quote of the Day:  "The first of April is the day we remember what we are the other 364 days of the year." - Mark Twain


Mr. Duez's very favorite April Fool's hoax of all time is Sidd Finch.  Sidd Finch was a fictional baseball player, the subject of the notorious article and April Fools' Day hoax "The Curious Case of Sidd Finch" written by George Plimpton and first published in the April 1, 1985 issue of Sports Illustrated.
Plimpton reported that Hayden "Sidd" (short for Siddhartha) Finch was a rookie baseball pitcher in training with the New York Mets. Finch, who had never played baseball before, was attempting to decide between a sports career and one playing the French horn. What was astonishing about Finch was that he could pitch a fastball at an amazing 168 mph, far above the record of a "mere" 103 mph, with pinpoint accuracy. He also wore only one shoe—a heavy hiker's boot—when pitching.
Finch grew up in an English orphanage and was adopted by an archaeologist who later died in a plane crash in Nepal. After briefly attending Harvard University, he went to Tibet to learn "yogic mastery of mind-body," which was the source of his pitching prowess.
The subhead of the article read: "He's a pitcher, part yogi and part recluse. Impressively liberated from our opulent life-style, Sidd's deciding about yoga — and his future in baseball." The first letters of these words spell out "Happy April Fools Day - ah(a) fib" Despite this clue and the obvious absurdity of the article, many people believed Finch actually existed. The magazine printed a much smaller article in the following April 8 issue announcing Finch's retirement. It then announced it was a hoax on April 15.

Learning Targets:
* Students will work on their thesis statements for the Modified DBQ Posters.  The thesis is a stand alone answer to the prompt.
* Students will turn in their video project and present to the class over the next week.

Agenda:
1.  "Good News for a Friday!"  Mr. Duez will discuss Teacher of the Year Sally Wagner.  He'll also discuss some of the great things AHS is doing to promote MS Awareness.
2.  Students will turn in their Video Project while their groups finalize their posters.
3.  We will either present some of the posters, or one of the video projects - depending on how much time we have left.