Quote of the Day:  "Great men become great because they have been able to master luck.  What the vulgar proclaim as luck, is the characteristic of genius." - Napoleon 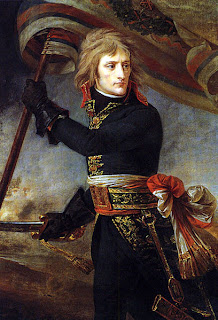 
Targets
*Review of The French Revolution from before Spring Break*
•  Napoleon formed a new government, the consulate, in which he held absolute power. In 1802 he was crowned emperor and signed a peace treaty with Russia, Great Britain, and Austria.
•  At home, he made peace with the Catholic Church and created a functioning bureaucracy. His Napoleonic Code preserved many of the rights gained in the revolution.
•  By 1807, Napoleon had created a French empire. In parts of the empire, Napoleon sought to spread the revolution. However, his invasions had contributed to the spread of nationalism as well.
Agenda:
Warm up Video:
1. Video on Napoleon from Chapter 18, we will discuss the video and take notes. (10 Min)
2. Notes - Napoleon - Notes Chapter 18 Napoleon
3. During Notes - Show "Engineering an Empire: Napoleon Steel Monster" It is about 5 minutes and goes into detail on the Arc de Triumph and how Napoleon crowned himself.
4. Review of the French Revolution (if time).
5. Video review of French Revolution in 3 parts (we'll watch part II and III today)
Part I:
Part II: http://www.youtube.com/watch?v=NTMFtLAS90Q
Part III: http://www.youtube.com/watch?v=PyZsLYxaIuM
6. Discuss Napoleon if time remains.
Tips for studying for the test on Wed/Thu:
Read Chapters 17 and 18 - Targets
Notes Chapter 17 Scientific Revolution
Notes Chapter 17 Enlightenment
Rousseau's Social Contract Explained
Notes Chapter 18 French Revolution
Notes Chapter 18 Napoleon
Watch French Revolution Video on You Tube
French Revolution Video Questions
Remember our discussion on gas prices :)
Come in for tutoring on Tuesday afternoon to ask questions of Mr. Duez
at 3/21/2011 08:36:00 PM