Quote of the Day:  "The war has ruined us for everything." Remarque, All Quiet on the Western Front 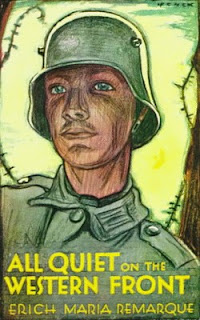 Targets for Chapter 23 - WWI:
• Most people in 1914 believed that the war would end quickly. The picture changed, though, as trench warfare between France and Germanyturned into a stalemate and casualties mounted throughout Europe.
• Italy switched sides, and the Ottoman Empirejoined the war on the side of the Triple Alliance. The war broadened further when German colonies came under attack and the British encouraged Ottoman provinces in the Middle East to revolt.
• The United States entered the war in 1917 in response to the German use of submarines against passenger ships. As the war dragged on, governments took control of national economies, censored the news media, and used propaganda to bolster public opinion.
• Women entered the workforce in large numbers. After the war, many lost their jobs to men but gained expanded rights and status. By 1921 women had the vote in Austria, Germany, Great Britain, and the United States.
Agenda:
1.  Harry's War - collect packets and discuss summaries.  We will get the packets back next week and have a socratic seminar over the packet.
Show Harry's War background info: