Today before we begin class, the President's address from last night will be shown and a quick discussion about last night's news will be conducted. 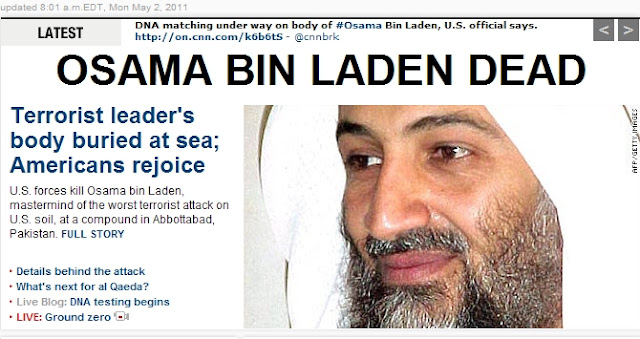 President Obama broke the news last night that US Military forces have killed Osama Bin Laden.  According to CNN.com:

DNA matching is under way on samples from the body of slain terrorist leader Osama Bin Laden, a U.S. government official told CNN on Monday.
There are photographs of the body with a gunshot wound to the side of the head that shows an individual who is not unrecognizable as bin Laden, the official said.
No decision has yet been made on whether to release the photographs and if so, when and how.
The mastermind of the worst terrorist attacks on American soil was killed by U.S. forces Monday in a mansion in Abbottabad, about 50 kilometers (31 miles) north of the Pakistani capital of Islamabad, U.S. officials said.
Four others in the compound also were killed. One of them was bin Laden's adult son, and another was a woman being used as a shield by a male combatant, the officials said.
Bin Laden's body was later buried at sea, an official said. Many Muslims adhere to the belief that bodies should be buried within one day.